Posted at 00:07h in Sin categoría by rpow

Solar and wind resources are displacing conventional generation, which is increasingly used to follow and firm variable generation. Thermal plants are operating at reduced capacity factors, are called on for load-following, and are being cycled, sometimes requiring two starts per day. Under these conditions, the heat rate increases, emissions limit run-time, and thermally stressed components have dramatically shortened useful lifetimes.

But as renewable deployment increases, it is not only thermal generators that must adapt. Having achieved its 30% renewable portfolio standard (RPS) goal, CAISO was forced, for example, to curtail almost 32 GWh of renewable power generation on April 21, 2019. By the middle of the next decade, over-generation is expected to be a daily occurrence as shown in Figure 1. 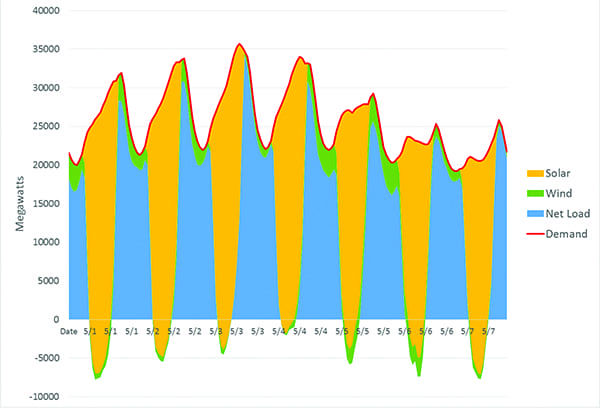 The power industry requires energy storage to play a critical role in the low-carbon transition, with North American potential estimated to exceed 100 GW, according to a presentation given by Ilya Chernyakhovskiy, who is a member of the Grid Systems Group in the Strategic Energy Analysis Center at the National Renewable Energy Laboratory (NREL). Chernyakhovskiy spoke in September at the Advanced Clean Energy Summit in Denver. He suggested for capacity and renewable time-shifting with duration of four to 12 hours, the storage system costs will need to be less than $150/kWh to make economic sense.

All Energy Storage Is Not Created Equal

Storage systems are comprised of charging and discharging systems that transform electricity to and from the internal energy of a storage medium. Different approaches are taken to achieve cost reductions.

Some technologies use cellular storage, while others use bulk storage media (such as water, air, gas, or flowing liquid electrolytes). Bulk storage tends to reduce the system cost at large scale, because adding more storage only requires a larger tank or reservoir, which enables economy of scale. Cellular batteries replicate modules to add more energy, so cost reduction relies on manufacturing economy, with modest scale effects.

Storage technologies also differ in their siting characteristics. Some require geological, topological, and hydrological features, while others can be more readily sited, subject to storage density and safety considerations.

Some storage technologies, like CAES and Liquid Salt Combined Cycle (LSCC), are hybrids that use two energy inputs—electricity during charging and fuel or waste heat during discharging. Hybrids can discharge more electric energy than was stored, so the term “roundtrip efficiency” is confusing.

■ Fuel Heat Rate. Expressed as Btu/kWh, fuel heat rate is the ratio of fuel energy consumed per electricity produced. This is the customary efficiency for thermal power plants.

■ Electrical Rate. Expressed as kWh/kWh, electrical rate is the ratio of electrical energy consumed per unit of electricity produced (the inverse of roundtrip efficiency used for single input storage systems).

These performance metrics are convenient for calculating the marginal cost of energy (MCOE) discharged from storage, using the following equation:

A key innovation is moving the boiler outside the gas path, reserving exhaust gas for heating feedwater to the boiler and superheating steam from the boiler. This increases the available steam flowrate by 2.5 to 3 times compared to conventional heat recovery steam generation, resulting in substantially higher steam cycle power output.

LSCC Works with Any Turbine

LSCC can be applied wherever there is wind or solar over-generation, reducing curtailment of renewable energy by storing and using it to displace fuel and decarbonize. LSCC can provide:

Whatever the turbine, hybrid integration results in substantial fuel savings, more bottoming-cycle capacity, and efficient recovery of stored energy. As illustrated in Table 1, the fuel heat rate is generally about half that of a simple cycle gas turbine, and the electrical rate is less than one.

Molten salt thermal energy storage is in use at concentrated solar power (CSP) plants in Spain, the Middle East, and at the 250-MW Solana Generating Station in Gila Bend, Arizona, which includes twelve 120-foot-diameter tanks storing 4,000 MWh of thermal energy.

Rather than using solar salt, which freezes at 460F (238C), LSCC uses a lower freezing point 288F (142C) eutectic salt, such as the HITEC heat transfer and storage medium from Coastal Chemical. This mixture of water-soluble, inorganic salts of potassium nitrate, sodium nitrite, and sodium nitrate is safe, non-flammable, non-explosive, and non-toxic. It provides exceptional heat transfer performance in a low-cost, reliable, and compact system.

The salt is heated to 800F (427C) as it circulates through parallel trains of medium-voltage electric heaters, such as the 10-MW, 6.6-kV units available from Chromalox. Electric heaters are inexpensive and flexible, offer high turn-down for demand response, single-cycle response for frequency control, and provide accurate temperature regulation. High-temperature salt is kept in an insulated carbon-steel hot tank, where thermal losses are typically less than 1C per day.

During discharge, the salt is circulated through a molten salt steam generator, available from a range of suppliers with experience on CSP projects. Aalborg CSP provides ASME-compliant boilers with the molten salt on the shell side of elevated heat exchangers to facilitate gravity drainage of salt when not in use, and it offers a guaranteed leak-free design. The boiler can be kept hot to provide instant startup or can ramp from a cold condition to full power in less than 30 minutes. The salt exits the steam generator at about 483F (250C), far above its freezing point.

At these conditions, carbon steel is suitable for tanks and piping, so the hot and cold storage tanks can be identical in construction. Three or more tanks can be used in a round-robin arrangement to provide redundancy and increase the storage density. A typical LSCC application requires about 12.25 metric tons of salt per MWh of delivered energy at a cost of roughly $2,000 per metric ton, or about $25/kWh, a fraction of the incremental cost of lithium batteries.

High-density and low-cost media make large-scale storage practical as illustrated in Figure 3, which shows three 92-foot diameter tanks, each capable of holding more than a GWhe of energy. In this example with an LM-6000 combustion turbine, the overall plant is rated at 91 MWe net, so the three tanks (two full and one empty) can provide 24 hours of full-load discharge.

Large-capacity storage tanks enable operators to optimize both economy and reliability. The system could be charged over the weekend, absorbing otherwise curtailed energy when available at the lowest cost. Throughout the week, the system could provide resource adequacy—discharging four hours a day during peak times from Monday to Friday.

An LSCC maintains resource adequacy without needing to immediately recharge with expensive or carbon-intensive electricity. During a contingency, the LSCC could operate longer, recharge itself, and if storage was spent, continue operating as a simple cycle. This provides superior reliability during extended weather, emergency, or transmission events.

When over-generation becomes the daily event predicted in Figure 1, the LSCC system can aid decarbonization by providing low-carbon power overnight to increase the capacity factor of both renewable and gas generating assets.

Hybrids Lower the Cost of Storage

The cost of storage at 100-MW scale, shown in Table 2, is taken from the Lazard levelized cost of storage reports (battery technologies from 2019, PSH and CAES from 2016) and Pintail Power’s estimates for LSCC. Only the LSCC, and potentially the CAES hybrid, are projected to meet the $150/kWh cost requirement suggested by NREL’s Chernyakhovskiy.

Lithium-ion technology has been the battery cost leader, but the pace of future cost reduction may be challenged by supply chain constraints, electric vehicle demand, and safety concerns. The National Fire Protection Association Standard for the Installation of Stationary Energy Storage Systems (NFPA 855) imposes new requirements that may also limit the rate of future cost reductions. Safety and prudence concerns raised by Arizona Corporation Commissioner Sandra Kennedy about hydrogen fluoride emissions may also inhibit lithium-ion battery deployment. Flow batteries are expected to benefit from industrialization, and, unlike the lithium-ion cellular technology, also benefit from economy of scale, but substantial cost reductions will be needed.

By combining low-cost electric charging, low-cost bulk storage media, and proven combined cycle equipment, LSCC can meet the $150/kWh target as a new-build system with a 12-hour duration, while adding LSCC to an existing plant can reduce the cost below $100/kWh. Further cost reductions can be achieved with larger-scale plants, two-pressure steam cycles, or by adopting solid thermal storage media that proponents claim would be lower cost than molten salt.

■ Even lower costs are achieved by upgrading existing power plants with storage resources.

■ Low fuel heat rate sets the stage for economical use renewable fuels, as they become commercially available to fully decarbonize.

Energy storage is becoming more important than ever, as renewable energy resources on the power grid grow. While all types of storage are important and useful in certain applications, LSCC utilizes readily available, proven technology to transform thermal generation assets into low-carbon resources that deliver capacity and energy at far lower cost than other storage systems. By improving renewable utilization, LSCC enables increased penetration as well as investment in green and renewable fuels. ■